About the Orthodox Church in America

Our history literally and physically starts in Jerusalem on the day of Pentecost. The Church begins first in Jerusalem (with James as bishop) and spreads to Antioch, Damascus, Asia Minor, Greece, etc. There is organic continuity between these early Apostolic churches as Christianity spreads far and wide, eventually reaching as far East as Siberia! All of these ancient Churches remained in full communion with each other, maintaining the deposit of Orthodox Christian faith and worship received from the Apostles. From 33 to 367 (proclamation of the New Testament canon) to 381 (proclamation of the historic creed) to 988 (conversion of Rus) to 1054 (separation between Roman Catholicism and Orthodoxy), there is continuity of structure, beliefs, leadership and worship. And so we arrive to the 1700s…

The Orthodox Church in America traces its origins to the arrival in Kodiak, Alaska of eight Orthodox missionaries from the Valaamo Monastery in the northern Karelia region of Russia/Finland in 1794. The missionaries made a great impact on the native Alaskan population and were responsible for bringing many to the Orthodox Christian faith. 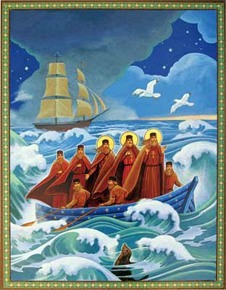 Today, the Orthodox Church in America numbers some 700 parishes, missions, communities, monasteries, and institutions throughout the United States, Canada, and Mexico.

In the 1820s, Father John Veniaminov arrived in Alaska and also conducted missionary work. Among his many accomplishments was the translation of Scripture and the liturgical services into the native dialects, for which he also devised a grammar and alphabet.

Around 1840 Father John was elected to the episcopacy, taking the name Innocent. The Church continued to grow among the native Alaskans, but Bishop Innocent also visited California and the Orthodox community at Fort Ross, north of San Francisco. He eventually returned to Russia, where he was named Metropolitan of Moscow. [In 1977, he was glorified (canonized) by the Russian Orthodox Church as a Saint of the Orthodox Church.]

While the Church continued to grow in Alaska, immigrants began arriving in what we today call the lower 48. In the 1860s a parish was established in San Francisco by Serbians, Russians and Greeks. [Today this parish is the OCA’s Holy Trinity Cathedral.] Gradually other similar parishes were established across the territory of the United States and, with the great waves of immigrants from Central and Eastern Europe, the Middle East, and Southern Europe at the end of the 19th century and the beginning of the 20th century, the headquarters of the North American Orthodox Diocese was moved to San Francisco and later to New York. By the early 1900s almost all Orthodox communities, regardless of ethnic background, were united in a single diocese, or jurisdiction, which was under the Russian Orthodox Church. In fact, the first bishop for Arab-Americans, Bishop Raphael Hawaweeny, was also the first Orthodox Christian to be consecrated to the episcopacy in North America. He and the parishes under his direction were an integral part of the North American Diocese. [Bishop Raphael was glorified as a saint in May 2000 by the Orthodox Church in America.]

In 1917 the Russian Revolution broke out. As a result communications between the North American Diocese and the Church in Russia were greatly hindered. In the early 1920s the Patriarch of Moscow, Saint Tikhon for ten years he had served as Bishop of the North American Diocese issued a decree calling on dioceses outside the borders of Russia [by then the Soviet Union] to organize themselves autonomously until such time as normal communications and relations with the Church in Russia could resume. Shortly thereafter, at a Council of all hierarchs and clergy and parish delegates, it was decided that the Church in North America could no longer maintain strict administrative ties with the Church in Russia, especially since Patriarch Tikhon had been arrested. [He subsequently died in 1925, and glorified as a Saint by the Russian Orthodox Church in 1989.]

Concurrently, various ethnic groups which had been an integral part of the single diocese organized separate dioceses, or jurisdictions, and placed themselves under their respective Mother Churches. This gave rise to the present situation of Orthodoxy in North America, namely the existence of multiple, overlapping jurisdictions based on ethnic background, rather than following the canonical principle of a single Church entity in a given territory.

In the early 1960s the OCA at that time it was known as the Russian Orthodox Greek Catholic Church of North America, or The Metropolia entered into dialogue with the Moscow Patriarchate in an attempt to regularize the Metropolias status. In 1970 the Metropolia once again entered into communion with the Moscow Patriarchate, which promptly granted it autocephaly, or administrative self-governance. At a Council of hierarchs, clergy and laity held at Saint Tikhon’s Monastery, South Canaan, Pennsylvania in the same year, it was decided that the Church should be renamed The Orthodox Church in America.

Today the OCA, in addition to counting the parishes of the former Metropolia, includes the Romanian Orthodox Episcopate, the Albanian Orthodox Archdiocese, and the Bulgarian Orthodox Diocese. Further, within the past two decades the OCA has established over 220 new parishes, almost exclusively non-ethnic in origin and employing only the English language in worship. [Virtually all of the former Metropolia parishes now employ English exclusively in the services.]

The Orthodox Church in America is a full member of the Assembly of Canonical Orthodox Bishops of the United States of America, together with the Greek Orthodox Archdiocese of America, the Antiochian Orthodox Christian Archdiocese of North America, and the other member jurisdictions. Hierarchs and clergy of the OCA regularly concelebrate with clergy of other Assembly jurisdictions. This is especially evident on the annual celebration of the Triumph of Orthodoxy on the first Sunday of Great Lent.

As a self-governing Church, the OCA has the right to elect its own Primate, or presiding hierarch, without relying on any ecclesiastical entity abroad for ratification. His Beatitude, Metropolitan Tikhon, the current Primate of the Orthodox Church in America, presides at meetings of the Holy Synod of Bishops, consecrates Holy Chrism, and carries out other duties appropriate to his office. Elected Primate at the 17th All-American Council convened in Parma, OH November 13, 2012, Metropolitan Tikhon was enthroned on Sunday, January 27, 2013, at Saint Nicholas Cathedral, Washington, DC.